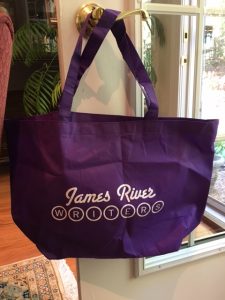 The annual James River Writers Conference was held last weekend. It is predominantly geared to writers, with lots of sessions on the craft and business of writing. But it also celebrates good writing—which is another way of saying, it celebrates good reading!
This year’s book contest was for the Best Self-Published Novel. No doubt the winner, Heaven Will Protect The Working Girl by Jo Allison, is a great read. It’s the third in a series of mysteries set in turn-of-the-century St. Louis. But don’t overlook the two finalists, Geoff Camphire and Bonnie Stanard. 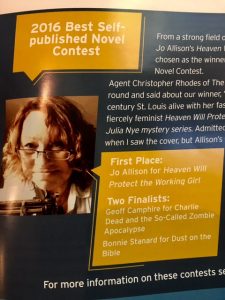 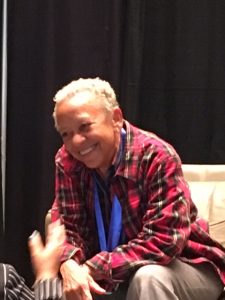 She is a poet, writer, commentator, activist, and educator. And, BTW, she’s also a very lively and humorous speaker! She’s won numerous other awards, and her publications are too many to mention here, but go online and be impressed—and maybe inspired to pick up one of her books!
Or perhaps you will be taken by the work of one of their Literary Awards Finalists in Poetry: Jon Pineda (winner), Joshua Poteat, and Claudia Emerson. 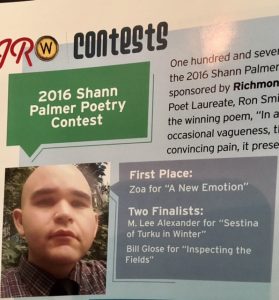 JRW also recognizes poetry. Check out this year’s winner (Zoe) and finalists of the Shann Palmer Poetry award.
Rita Dove said, “Poetry is language at its most distilled and most powerful.” Perhaps it’s time to see for yourself.
If, in spite of it all, you aren’t drawn to poetry, the Library of Virginia also makes annual awards in fiction and non-fiction. This year’s Library Award in Fiction was won by Robert Goolrick for his novel The Fall of Princes. Other finalists were Leslie Pietrzyk and Sara Taylor. Goolrick was interviewed for JRW attendees Saturday afternoon. Although he attended Johns Hopkins University, he was born in Virginia and lives here now.
His novels include  A Reliable Wife, Heading Out of Wonderful, and The End of the World as We Know It—plus several others.
The Library Awards Finalists in Non-Fiction were Bert Ashe, Mary Sarah Bilder, and Kristen Green. Bilder’s book was Madison’s Hand: Revising the Constitutional Convention; Ashe’s book was Twisted: My Dreadlock Chronicles. Green won for Something Must Be Done About Prince Edward County. 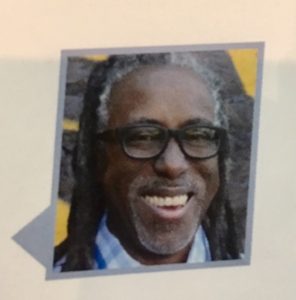 Ashe spoke at two JRW sessions: “Writing What You Know: Turning Your Personal Experiences into Sellable Books” and “Powerful Articles” were very well-received. (Other panelists were Kurt P. Behm and Jessica Lahey.) He also joined Phaedra Hise and Jason Tessuro for the “What’s Your Story?” presentation on how to make a story that entices readers beyond our own limited sphere of influence.
So pick up a good memoir or two—or three or four! It’s always a good day to read.
UPDATE: This post was corrected to acknowledge Kristen Green won the 2016 Literary Award for Nonfiction.