Skip to content
UCI Road World Championships are over and congratulations are due to all cyclists, especially Chloe Dygert and Emma White, two US cyclists who came in first and second in the women’s junior road race. Dygert and White were also 1 & 2 in the women’s junior time trial. It made me reflect again on the long-term effects of bicycles in women’s lives.
On September 17, I posted this picture on my Facebook page and mentioned that some suffragists called bicycles Freedom Machines because of all they opened up in the lives of 19th century women. I’ve been thinking about bicycles a lot this past week, and it seems this is a topic worth revisiting after the close of race week. 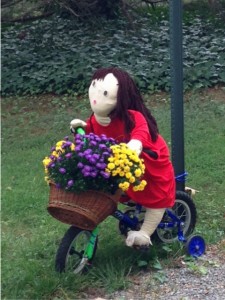 Male domination of cycling ended as a result of the introduction of the safety bicycle in the 1880s. The safety bicycle had smaller wheels, a lower seat, a diamond frame and (soon) pneumatic tires. In 1896, Margaret Valentine Le Long garnered fame (if not fortune) by riding a safety bicycle from Chicago to San Francisco.
Not all women cycled for feminist reasons. Indeed, at the end of the 19th century, some cycled in order to expand Victorian moral and aesthetic tastes and sentiments into the public arena. These women cycled to feminize, domesticate, and civilize public spaces they considered masculine, loud, and rowdy.
But regardless of why women took up cycling, the bicycle took them out of the home and into an expanded world. In addition, practical dress for women cyclists (in addition to eliminating corsets) resulted in divided skirts, bloomers, and knickerbockers. It was practical, facilitating more comfortable riding. But at the same time, it was symbolic in breaking from the dominant norms of appropriate female dress and behavior. In 1896, Susan B. Anthony told the New York World’s Nellie Bly that bicycling had “done more to emancipate women than anything else in the world.” 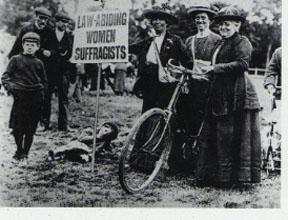 Frances Willard, suffragist and founder of the Women’s Christian Temperance Union, was one of the most famous women of her day with a mass following of independent-minded, often politically active women. At the age of 53 Willard determined to learn to ride a bicycle because she “wanted to help women to a wider world…from natural love of adventure—a love long hampered and impeded…[and] from a love of acquiring this new implement of power and literally putting it underfoot.” Her book, A Wheel Within a Wheel: How I Learned to Ride the Bicycle, was published in 1895. Bicycling magazine called it “the greatest book ever written on learning to ride.”
In his novel trilogy The Forsyte Saga, John Galsworthy had this to say about cycling: “Under its influence, wholly or in part, have wilted chaperones, long and narrow skirts, tight corsets, hair that would have come down, black stockings, thick ankles, large hats, prudery and fear of the dark; under its influence, wholly or in part, have bloomed week-end, strong nerves, strong legs, strong language, knickers, knowledge of make and shape, knowledge of woods and pastures, equality of sex, good digestion and professional occupation—in four words, the emancipation of woman.” (Quoted in Dave Horton’s “Social Movements and the Bicycle.”) 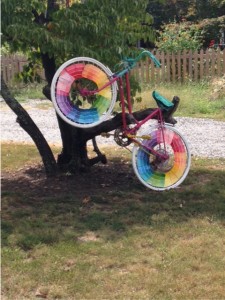 Some authorities warned against excessive cycling by women, girls, and middled-aged men. Also of concern in the 1890s was the possibility that bike riding might be sexually stimulating for women—which resulted in remodeled “hygienic” seats, high stems, and upright  handlebars that reduced the angle at which women would ride.  Even so, through cycling, doctors discovered that exercise is healthful—even for women! The bicycle caused the death of the corset and “straight laced” women, leaving only “loose” women. (FYI: during the Civil War, “loose women” were also known as “soiled doves.”) 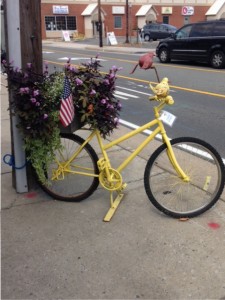 Willard named her bicycle Gladys, for the “gladdening effect” it had on her health and political optimism.The overall message of her book presented mastery of the bicycle as a metaphor for women’s mastery over their own lives. 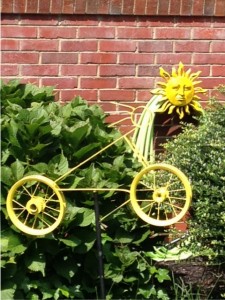 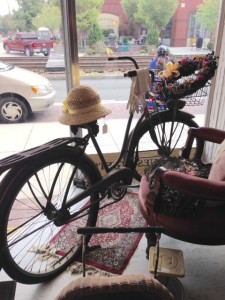 So, that’s all ancient history, right? None of this really speaks to women today, right? Unless you are Rosemary Shomaker—or one of the platoons of other women whose experiences still resonate with those of our foremothers. Rosemary posted on my Facebook page: “In the 1970s the bicycle was definitely a ‘freedom machine’ for one girl escaping a less-than-fabulous home life—me! I rode my bike everywhere. To softball and field hockey practices ad gaes. To my part-time job. To friends and boyfriends; houses. To Wolf Trap Farm Park. Along the W&OD bike path. To parks. To tennis courts. Early bike riding shaped my still uber-independent spirit. Go Richmond 2-15 UCI Road World Championships! Best wishes from a bike lover.” 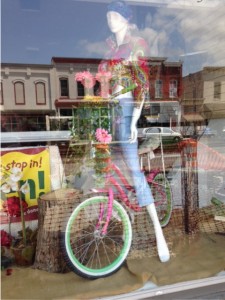 I was never a bike-for-pleasure person. But bike as transportation was a big deal. It allowed me to ride from my house a few miles along a county road to visit with my cousins. My sister and I shared that bike. When I got my first car at 16, my dear sister got sole possession of that dear bike.
Go, girls! Go! 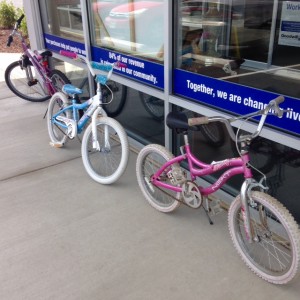