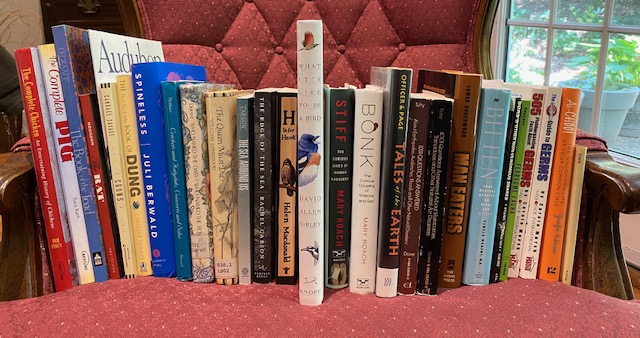 “Why hellebores?” Well might you ask. Because they are my favorite! And because they can be useful for your characters and plots.

When we moved to Ashland, Virginia, we bought an 1858 Greek Revival house on a double lot with old trees and daffodils and not much else. I searched for shade-loving, blooming, evergreen, low-maintenance plants. Voila! Hellebores. They are all of that plus, as a bonus, the blooming happens in winter and early spring.

Behold Hellebore niger, aka Christmas rose, a welcome sight come December. It’s pretty and reliable! The opening picture is from this year, New Year’s Eve. The picture just above is from 12/21/18.  Hellebore niger is the earliest blooming hellebore I’ve found.

Close on the heels of the Christmas rose is the Lenten rose (aka Hellebore orientalis) and its various hybrids. Please note: despite being called Christmas rose and Lenten rose, hellebores are only distantly related to the rose family. This picture of purple and double white hellebores is from March 3, 2019.

Although the flowers and foliage of most hellebores are similar, the Stinking hellebore (Hellebore foetidae) is distinctively different. Its leaves are narrow and knife-like, and cluster at the ends of stalks. The flowers are smaller and droopy, and mostly a pale green.

Hellebores bloom throughout the spring, in a riot of colors. They bloom until the heat of June or July do them in. At that point they drop seeds, and where they are happy, they spread into lovely clumps.

Although they need water during droughts, they are low maintenance. Prune browned-off leaves and dry flowers at will. There are supposed to be a couple of insects and a fungus or so that can attack them, but I’ve never had either. Animals—deer, rabbits, etc.—usually don’t chomp on hellebores because of the (dis)taste of the leaves.

So no wonder I (as well as real gardeners) love hellebores!  But why would a writer care?

All parts of all hellebores are toxic!

Somehow, this did not come to my attention when I wrote My Poison Garden last fall. (How could that have happened?)

Although poisoning is rare, it does occur through ingestion of large quantities, and it can be fatal.

How might a character be induced to ingest large quantities of a foul tasting plant?

Dermatitis is fairly common, caused by handling the plants without protection.  Contact with leaves, stems, flowers, and sap can cause irritation and burning on the skin. Minimal exposure should cause a mild, short-lived irritation and can be treated by washing with soap and water. How might a scene be affected by a character suffering contact dermatitis?

Although hybrids that look nearly black have been developed, historically Black hellebore is another name for Hellebore niger, the white blooming Christmas rose. Black hellebore was used by the the ancient Greeks and Romans to treat paralysis, gout, insanity, and other diseases.  Beware: it can also cause tinnitus, vertigo, stupor, thirst, difficulty breathing, vomiting, catharsis, slowing of the heart rate, including collapse and death from cardiac arrest. Not quite so serious: can cause burning of the eyes, mouth, and throat; or oral ulceration, gastroenteritis, a hematemesis. Could the toxicity of hellebores create an illusion of a chronic disease or disorder of unknown origin?

Folklore and legend vary from the sacred to the dark arts. Could your plot take elements from these?

Bottom line for gardeners and writers: get thee hellebores!