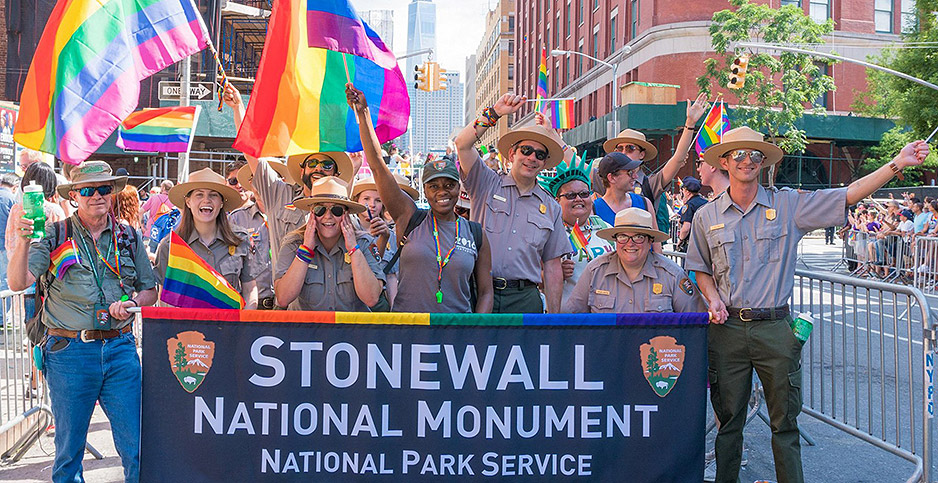 Earlier this month, the Supreme Court ruled 6/3 that LGBTQ people are covered by Title VII and cannot be discriminated against in the workplace. This ruling coincides with the 50th anniversary of the organization of Gay Pride events in the U.S.

A Brief History of LGBTQ Rights in America

The 1960s was a time of civil protest in general (you heard it here first!), including protests and demonstrations seeking civil rights for lesbians and gays. In 1965, homophile organizations started Annual Reminders pickets, reminding Americans that LGBTQ people did not have basic civil protections.

At the time, both gay and lesbian people were classified as mentally ill in the Diagnostic and Statistical Manual of Mental Disorders (DSM) used throughout the mental health system. Not until 1987 did homosexuality completely fall out of the DSM!

Veteran activist Scott Hix provides context for the beginning of the national push for equality. “Stonewall was not the beginning of gay rights. It was just the tipping point of our continued pushback because of the exposure from the New York Times.”

For years before the raid of the Stonewall Inn in New York, Hix worked to get respect for the LGBTQ community on the West Coast, including the Compton Cafeteria Riots in San Francisco. “Scott worked in bars as a drag queen at the time and he vividly remembers the times when the cops would raid the bars, throw everyone in jail for a night, and destroy drag queens’ wigs by setting them on fire or flushing them down a toilet, then they would make the queens wash their faces with dirty mop water.”

The seminal event for LGBTQs occurred in June, 1969. Police raided a gay bar, the Stonewall Inn in New York City, triggering spontaneous riots by LGBTQ people there. An organized march on June 28, 1970 marked the first anniversary of the Stonewall Riots. This is now seen as the first Gay Pride march in U.S. history.

At the time of the Stonewall Riots, it is estimated that there were 50-60 gay groups in the country.  By 1972, that number had grown to 2500, and marches took place in Atlanta, Brighton,  Boston, Buffalo, Chicago, Dallas, Detroit, Miami, Milwaukee, New York, London, Paris, Philadelphia, West Berlin, Stockholm, and Washington, D.C.

By now, the entire month of June is celebrated as LGBTQ Pride Month. It has been recognized by three U.S. presidents: Bill Clinton and Barack Obama via official proclamations, and Donald Trump in via Twitter. Events range from marches to festivals, nationally and internationally.

Stonewall Inn and the Christopher Street Park were declared a National Monument by President Obama in 2016.

More detail can be found on Wikipedia (of course) and by accessing the Library of Congress and Smithsonian portals. Irene Monroe has provided a first-hand account of the events at Stonewall in The Advocate.

Because any realistic group of characters that are even remotely representative of the population as a whole is likely to include LGBTQ characters. Because far too many authors write gay characters who have no personality except being gay. Because, even when LGBTQ characters are included, they are often killed off quickly as nothing more than a plot device.

Because (even if you don’t know it) you almost certainly have friends, colleagues, and family members who identify somewhere along the LGBTQ spectrum. Because people who identify as LGBTQ are still more likely to face harassment and discrimination, even in the US, even in light of the recent Supreme Court ruling. Because LGBTQ children and teens are far more likely to deal with bullying, discrimination, homelessness, and suicide from a lifetime of being told by media that they are not normal and a source of shame.

Because LGBTQ People are All Around

Though accurate numbers are difficult to estimate, a significant portion of the U.S. population is LGBTQ; 4.5% overall, 5.1% of women and 3.9% men.  The number who identify as transgender is estimated at 0.6%. In addition, be aware that these percentages are not evenly distributed across states, cities, or countries.

The five “gayest” cities, in rank order by % of population are:

Because Others Can’t Be Proud Without Fear

Major advances in equality in have been made recently in Europe, Canada, the US, and India, among other countries. However, in many countries, LGBTQ people face significant danger of jail or even death if their orientation becomes known. Still, people turn out for Pride celebrations despite the danger.

Because Pride Is the Perfect Time to Propose

Because Pride Has All the Best Fashions

There is more LGBTQ literature available than you might think. Wikipedia has a 44-page list. Here are some examples of well-known authors you may not have known are or were LGBTQ.

Bottom line: This month you can support LGBTQ colleagues by marching, celebrating, or (amid COVID-19) by reading LGBTQ literature.