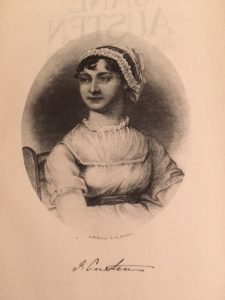 On March 18, 1817, Jane Austen wrote (and dated) her last lines of fiction. She had begun the work on January 27, 1817, and in less than two months had written some 23,000 words! That alone is enough for me to put her on a pedestal. She has been a favorite author of mine since college.
Austen had not titled her unfinished novel but it has come to be known as Sanditon, named for the location of the story. The unfinished manuscript was first published in 1925 and is still in print. 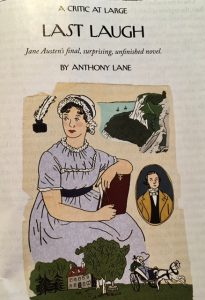 The March 13, 2017 issue of The New Yorker has a well-written and informative article (need I even say that about a New Yorker article?) about the book, with biographical notes on Austen.
According to Anthony Lane, Sanditon is filled with Austen’s signature humor, wit, and unerring eye for human folly—in this case, focusing on a town full of hypochondriacs. He also comments, “Austen knew as well as anybody that, in the long run, hypochondriacs aren’t wrong. They’re just early.”
At least seven writers have finished Sanditon—according to Lane, with varying degrees of success. No doubt some of these are available.
Austen died four months after penning her last fiction lines, on July 18, 1817. The cause of her death is still debated, perhaps Addison’s disease, perhaps Hodgkin’s disease. Lane calls her last book an “exercise in courage.” I’ve just ordered it!