You may recall that a while back I said that you mustn’t be bound too much by reality–e.g., that just because someone said it that way doesn’t mean it’s a good way to say it, just because it really happened doesn’t mean it’s interesting. This is in the same vein: just because it happened in 1964 doesn’t mean you can’t set it in 1934–and vice versa. Of course, if it is something famous, like the Lindbergh baby kidnapping, you can’t move it around too much unless you are writing sci fi or magical realism. But if you have a story about a great uncle who was married five times that the family knows about, there is no reason you can’t write about such a character in current time.

Similarly–with certain obvious exceptions–just because the actor was a male doesn’t mean you can’t attribute the action to a female. Ditto parents and grandparents, siblings and cousins.

Actually, I haven’t been dead, just buried. But after a long stretch when life was on top of me, I am again motivated to try my hand at social media. I’ve recently had a book signing at Sailing Associates, in Georgetown, MD, featuring Tiger Heart, the second Chesapeake Bay Mystery. The next signing scheduled is for the Chestertown Book Festival, Chestertown, MD, on Saturday, Sept. 21. 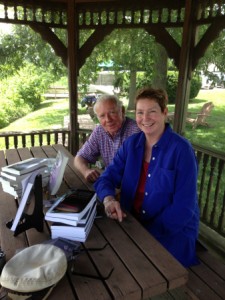